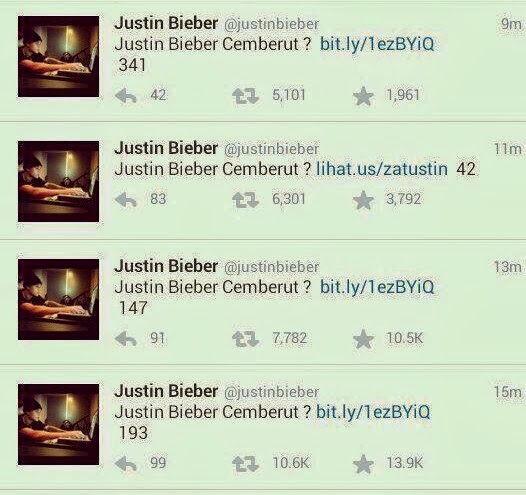 Malicious links were tweeted from the account which read “Justin Bieber Cemberut?”,originally in Indonesian, meaning – “Justin Bieber sullen?” in addition to the short statement the tweet Contained a Malicious link of a application hosted on (rumahfollowers[.]tk) the app “ShootingStarPro” hosted over the domain is used to hijack accounts.

The Malicious link was Retweeted by the followers over 30,000 times with additional 25,000 users favourited the tweet. However Justin’s management team overseeing the Twitter account were soon able to delete the tweet and the Account was back to normal, “All good now. We handled it.” the next tweet said, “That link from earlier. Don’t click it. Virus. Going to erase this now. Spread the word. Thanks.“

The Followers who have mistakenly clicked the link should change their password, and warn their followers in case Direct messages and tweets were sent by the malicious apps, through their Accounts.

The Malicious links like these are very common on twitter, most of which reads to “get free followers”, and once a victim clicks on it, his/her Twitter Account is compromised and starts sending Tweets/Direct Messages containing the malicious payload to the followers of the person.