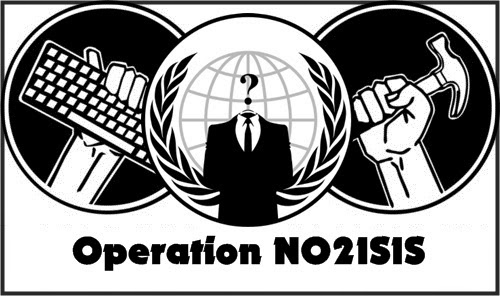 The group of hacktivists “Anonymous” has announced its plans to launch cyber attack against the countries which are believed to be supporting the Islamic State of Iraq and Syria (ISIS) group.

The Operation dubbed as OPNo2ISIS will soon start knocking the cyber space of the Countries who are funding the ISIS. The primary target constitutes of Turkey, Saudi Arabi and Qatar.

“We plan on sending a straightforward message to Turkey, Saudi Arabia Qatar and all other countries that evidently supply ISIS for their own gain,”said one of the Anonymous member.

Saudi Arabia has been long believed to be the chief financier of Islamic State of Iraq and Syria (ISIS) and other jehadi terrorist groups. However, today the Saudi government has dismissed Iraqi prime minister Nouri al-Maliki’s claims that it arms and funds ISIS, describing them as “false allegations” and“malicious falsehood”. The Saudi royals are thought to be terrified of aftershocks that will emerge from the wars in Iraq and Syria and this may be the reason it has recently taken steps to ban private individuals from donating cash to ISIS militants.

“We are unable to target ISIS because they predominately fight on the ground. But we can go after the people or states who fund them.”

The hacktivists collective, Anonymous  plans of to DDOS and deface Government and military websites of the countries supporting the ISIS in any which way.

The war over the Internet has already began. last week one of the Anonymous affiliated Twitter account  @theanonmessage was taken over by ISIS supporters and dozens of graphic images of violence were tweeted using it. The Anonymous members who operated the said twitter account said they were surprised to find the tactics used to hijack the account was almost similar to that used by Syrian Electronic Army.

However Syrian Electronic Army  has neither refused the claims nor accepted that it was behind the hijack.  The Syrian Electronic Army, which famously hacked a number of targets including The New York Times, Forbes, Onion, Microsoft generally targets the western media group and goes global announcing the responsibility of their hack.

Although ISIS has not yet joined the cyberwar, but there is a distinct possibility of the physical war going on in Iraq and Syria spilling on to the cyber world.  It is believed that ISIS supporters will start their own cyber operation to fight the anti ISIS Hacker groups active in the cyber space.

The scenario of the physical war spilling over to cyber world is a grim situation for all concerned. More so if the allegation made to the SEA comes true and they are indeed supporting  ISIS.  The effects of such a cyber war can cause turmoil not only in the cyber world but also in the real world with stock markets plunges and economical damages.