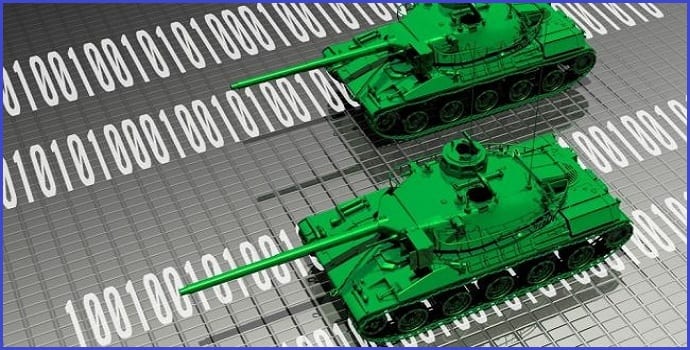 Ind-Pak hackers gearing up for a all out Cyber-War?

The recent cease fire violations and the resultant Indian governments free hand to its BSF outposts at the Border (LOC) have further tensed up the relations between India and Pakistan.  The latest flare up has resulted in deaths of at least 16 people nine of them Pakistani and seven Indian (figures unconfirmed) during the  exchange of shells and mortars. A further thousand have to flee their border lying homes to a safer place.

India on Tuesday put on hold the flag meeting with the Pakistan Army, deciding to  instead, wait for Islamabad to make the first move to control its military and the address the ceasefire violations.

While the tension on the LOC (Line of Control) does not seem to be ending up soon, the cyber warfare between the hackers from two countries  seems to be only have begun.

Pakistan Peoples Party’s website was hacked and defaced last Wednesday by Indian hackers over a controversial statement made by PPP’s Leader Bilawal Bhutto Zardari, that he will take back the entire Kashmir inch by inch.

Was this a beginning call for a all out cyber war?

The hacking of PPP website seemed to some sort of clarion call for hackers of both the countries.  Following the hack of Pakistan Peoples Party’s website, some Pakistani hacker/s retaliated immediately hacking more than hundreds of Indian websites including those of the Indian Government, political leaders, NGO’s and Bollywood celebrities.

India’s ruling political party, The Bhartiya Janata Party (BJP) was one of the most targeted by Pakistani hackers.  They managed to infiltrate, hack and deface more than a dozen BJP promoted websites. though they are mostly regional/state websites.

Most of these websites were restored just few hours after the hack, list of few websites hacked can be seen from the paste below, along with the mirror (web cached version) of the defacement.

In a tit for tat action, Indian hackers attacked the Pakistan Railways website and it was hacked and defaced late night apparently in response to the the day long attacks on Indian cyber interests by Pakistani hackers.

Indian hackers who love their celebrities, also hacked the Pakistan government owned Pakistan Electric Power Company website and defaced  it in direct response to the hack of the website of Mohanlal Viswanathan Nair, an Indian film actor, singer and producer.

The Press Club of India was also hacked by the Pakistani hackers, who left a message on the hacked website that, “Muslims are not terrorist”, a line that seems to be lifted from a blockbuster Bollywood film starring another Bollywood superstar Shah Rukh Khan. “My name is Khan, and I am not a terrorist” says SRK in My Name is Khan.

The Other Side of the Coin:

While the Hacking attack resulting in defacement are easily being noticed, this is just only a part of large scale Cyber-War going between the two countries.

Recent reports from wikileaks, Fire eye and Threat connect suggests that Pakistani security firms in active collaboration with the Pakistani Government,  have been continuously involved  in cyber-espionage over India.

The cyber espionage operation which the security researchers have dubbed as “Arachnophobia” was started in early 2013 involving a Pakistani Cyber Security firm and possibly funded by Pakistan Government.  Arachnophobia specifically targets  Indian Government organizations for espionage and is connected to Pakistani hacker group PCA, a recent report has suggested.

The reports suggest that the PCA is actively supported by the Pakistani Government and security firms.

While the tensions and firing that is going at the border/LOC is not going to fade away soon given the Indian Government’s stern warning to Pakistan and open orders to its military, Cyber war between India-Pak has certainly started and we may expect more and more attacks and may be deadlier attacks causing more and more damage to each others cyber space.