Serbian hackers broke down the site of the Albanian state television RTSH.

Hackers at one point put up a image of  burning flag of Albania, and  embedded map of Kosovo with the message in English: “Kosovo is the heart of Serbia“.
The defaced site of Radio Television of Albania was not accessible for many hours. Instead of regular content the website was showing the message that the site is “under construction” after several hours and the picture of hooligan setting flag on fire was removed.

The Hackers collective that performed this defacement calls themselves simply “Serbian Hackers“. Defacement happened as a response to soccer match in Belgrade between the national teams of Albania and Serbia, which was suspended after a drone flew over the field waving a Greater Albania flag. The video coverage of this event is reported by Ars Technica, but video is removed as of now.  A Serbian player eventually grabbed the flag at the Partizan stadium, prompting an angry reaction from Albanian players and an unsightly melee ensued.

Riot police then moved in when around a dozen fans invaded the pitch and attacked the Albanian players, forcing them to retreat into the tunnel as flares were thrown from the terraces.

Greater Albania is  project that aims to unite all Albanians in one state. This concept is often referred to as “ethnic Albania” (similar ideas coexist in Serbia and Romania, and are supported by foreign private intelligence firms working on gaining political momentum.  For instance  the foreign intelligence is allegedly supporting Hungarian regime to federalize a part of Hungarian-majority territory in Romania and bring it in to Hungary.   The roots of idea of Greater Albania a can be traced back to the League of Prizren in 1878, which sought to unite all the Albanians of the Ottoman Empire.   On a contrary, Albanian PM thinks it’s invention of the Serbs. He stated on his Twitter today that ‘Normal Serbia might be possible only if Real Serbia will understand that Greater Albania is their nightmare not our project!

Normal Serbia might be possible only if Real Serbia will understand that Greater Albania is their nightmare not our project!

Relations between the two countries have been tense since the Tuesday’s incident in which a drone bearing a flag representing “Greater Albania,”  flew over a major soccer match between the Albanian and Serbian teams, prompting a brawl on the field and the cancellation of the game.

According to Reuters, Serbian Interior Minister Nebojsa Stefanovic earlier on Thursday claimed the incident showed that Albania was “not mature enough” to join the European community. At the same time Albanian Prime Minister Edi Rama said he was “disappointed” at Serbian officials’ comments following a drone stunt at a soccer match.

Serbia’s foreign minister blamed the brother of  Edi Rama, the Albanian Prime Minister for flying the drone, amidst reports that Olsi Rama had been arrested in the VIP stands of the Belgrade stadium with the remote control in his hands. The brother of Albania’s prime minister has denied being behind the incendiary flag-flying stunt that led to the abandonment of his country’s Euro 2016 qualifier against Serbia.

Serbian-Albanian cyber-attacks and tensions have been going on more than a decade now. It has also spilled over into cyber space with the two sides undertaking a tit-for-tat policy of defacing of governmental sites in many cases is  followed by somewhat extreme messages related to Kosovo. Attacks against small websites of both countries are almost every day hacker practice in the Balkans. Cyber-warfare is carried out by different hacker groups not related to Anonymous movement, and messages spread over governmental sites in the region are in many cases of racial, chauvinistic and devious hate messages which Anonymous movement never spreads.

What is behind cyber-attacks? Usually its burst of patriotism that occurs on every big national holiday. Cyber keyboard warriors from both sides, Serbian and Albanian, are skilled in defacing sites of “enemy”. A number of sites were attacked by the Albanian hacker groups in the last few years, starting from religious websites and media outlets, to websites of municipalities on North Kosovo, 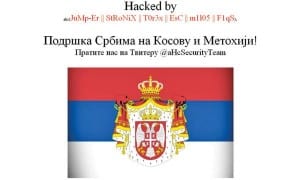 A couple of  years ago Serbian flag, the anthem and the message  “‘This is the Studenica”  appeared on several websites of Kosovo institutions as the response to Albanian hackers who attacked the website of Serbian monastery “Studenica”.

Clearly, its very hard to say which hacker community is winning the cyberwars in the Balkans. So far there is no confirmation that any of hacker groups, Serbian or Albanian, is getting funding from government.