Beware of websites claiming to share TheSnappening file links, they may infect your computer with a malware!

Recent leaks from SnapChat purportedly containing 98,000 images have created a massive interest in the tech-world and cyberspace and people from around the globe are searching for the leaked snappening images on the internet.

This presents a godsent opportunity for the spammers and cyber criminals, who have naturally taken advantage of the hype and curiosity in TheSanppening, to serve malwarertising  and inject malware by luring victims who wonder around looking for the leaked images.

Redditors who are often at the forefront of noticing such malpractices by the cybercriminals, have warned the users who have been surfing the web looking for the Snappening leaks about the impending doom.

TheSnappening subreddit and many other similar reddit categories are filled up with the links allegedly claiming to be ‘the download link’ of the 13Gb Snappening image leaks files.   Most of these links when followed, do not have much to show as claimed in the description and often take visitors to a malwarertising laden NSFW websites.  Some of the links contain sinister malware which can harm the victims computer and steal personal information.

“I definitely got some kind of virus or other s*** trying to download one of the links yesterday. Computer’s been going nuts all day, one of the redditor said.

Apparently, the post from the Redditor, sinisterkittenninja was disliked and it was downvoted but whatever it stated holds true. 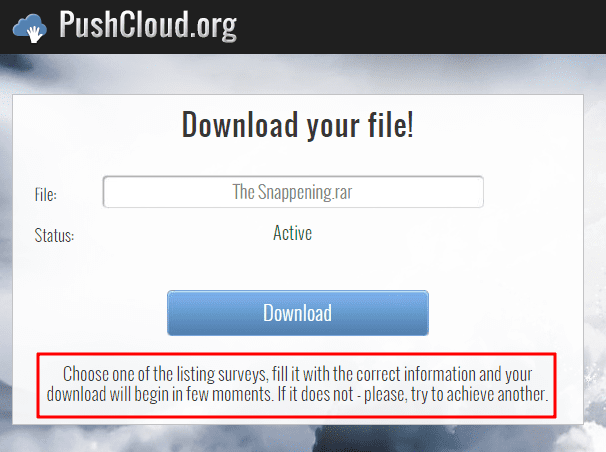 But following the links only leads to a download site filled with surveys.

In another thread there is a “Snappening leak,” which claims to contain the leaked list of usernames and passwords from the Snappening victims, but is found to be serving malware.

The original Snapchat leak is reported to contain thousands of NSFW images of which majority belongs to 13-17 year olds and sharing, downloading or hosting any such content is a federal crime in the United States as well as many countries around the world.

The best way to avoid malwares is to avoid any such tempting links which claim to be serving such objects.