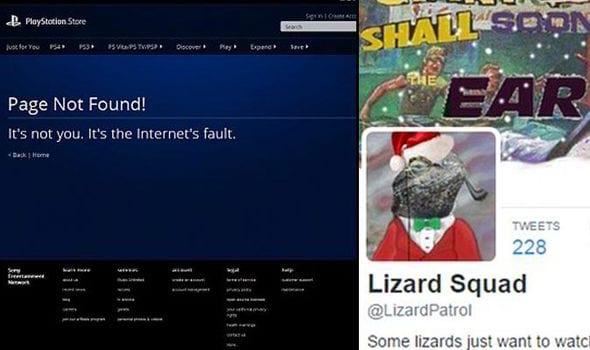 The hacker collective, Lizard Squad seems to be playing with Sony and Microsoft like a cat plays with the mouse.  They had promised yesterday when they took down the Microsoft’s Xbox Live servers, they DDoSed PlayStation Network today.

There were reports of that customers trying to access the PlayStation Store were greeted by a note saying “Page Not Found! It’s not you. It’s the internet’s fault.” However PlayStation owners were able to play games offline, but couldn’t chat with other players or make use of network functions.

However as of now PlayStation Knowledge Center is still registering the service as being online, UK players have confirmed that PS4 players can access the network.  Online games such as Destiny continue to be inaccessible, with an error message reading: “Unable to connect to PSN.” and  “Please check your network connection and PSN status.” PSN users took to Twitter to vent their fury against Lizard Squad who seemed to enjoying the lulz.

One user challenged them to take down Wii U servers

Meanwhile Lizard Squad have said that the hack attacks would continue till Christmas. Sony (SNE) meanwhile has said the problem had been resolved and it was investigating what caused the outage.  This DDoS attack is in no way connected to the #GOP hack attack on Sony Pictures Corporate Network servers.