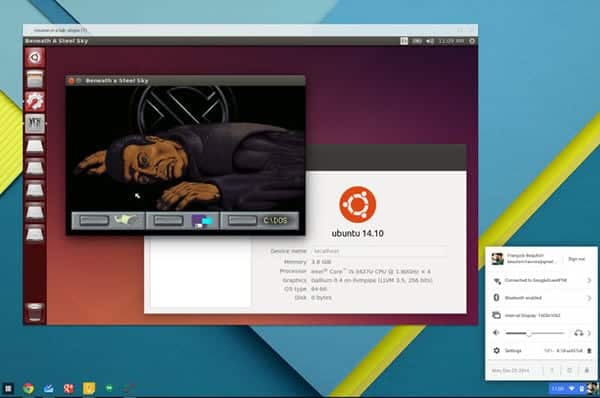 Chrome OS is becoming more polished with new features everyday. Now it has a powerful feature of running full Linux apps thanks to one of Google’s bright interns. An announcement that a Google intern has made it possible to run Linux directly in a Chrome OS window. This means users can run any kind of Linux application (such as Skype, etc.) from a Chromebook.

Francois Beaufort, a Chromium evangelist, made the announcement in a Google+ post:

“Google Intern has added support to run Crouton¹ in a Chrome OS Window. Thanks to a 4,471 lines patch², fearless people can now run their favorite Linux distributions on their Chrome Devices in a nice window without jumping between Virtual Terminals as before.”

Chrome OS originally started out as an “operating system” designed to work primarily online, and over the course of time the development team begun adding more offline features. Focused around the new HTML5 standard. Apps such as Gmail or Google Drive, which take input while offline and then sync the data later to the cloud, to receiving support for C++ applications through the Native Client plugin.

Google took this Chrome OS and even started supporting full Android applications, starting with a few at first but building more as development continued.

Originally Linux could be installed on a Chromebook machine along side of Chrome OS, dual booting both operating systems, or optionally run both at the same time using a tool called Crouton with some configuration. But now setting it up is much steam-lined than before.

Currently all you have to do is put the Chromebook in developer mode (like the bootloader unlock for a Nexus phone), install the new Crouton extension, download the Crouton tool and then type a simple command. After that you’ll be able to use any Linux distro you want within a Chrome OS window.

Chromebook growth has been slower in the mainstream market because some incompatibilities with some apps and not all apps are available on Chrome OS. But with support for full Linux applications that will help the popularity of the Chromebook and make the gap between application support more palatable..

Linux is a powerful Operating System in its own right and Chromebooks are an inexpensive way of have portable computing units capable of powerful development. While you may not be able to professionally edit video or play the cutting edge 3D games, you will be able to write full-scale web applications in the variety of languages available on Linux. Thus, now a Chromebook can become a powerful portable programming tool that is web enabled for checking email, posting on Github and running web servers. This feature is no small feat and brings a programming tool to more of the masses each day.