UPI’s feed said that the Pope said World War III had begun and the New York Post’s business section Twitter feed mentioned that Bank of America’s CEO was calling for calm after a Federal Reserve decision.

Series of Identical tweets were posted to the feeds of the New York Post and United Press International which involved “active combat” between U.S. and Chinese navy vessels in the South China sea. Jenny Tartikoff, a spokeswoman for the NYPost said the hacks are being looked into. 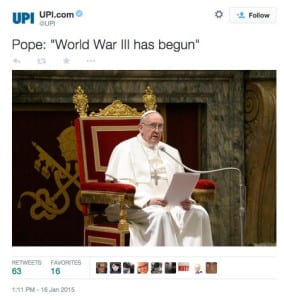 Other high-profile attacks, earlier this week that compromised the U.S. military’s Central Command allegedly by hackers claiming to support the Islamic State militant group. Crayola was also targeted and had to apologize when their Twitter feed was filled with obscene off color sex jokes. The twitter hacking trend was even as early as 2013 when Burger King’s Twitter feed that put up the McDonald’s logo.

Unfortunately these attacks are prompting The White House to push for more draconian regulations involving new cybersecurity legislation which while increasing the sharing of information between U.S. agencies and the private sector also creates complications for legitimate cyber security researchers and reporters as growing fear of future attacks prompts blow back from US. And other regulating bodies. 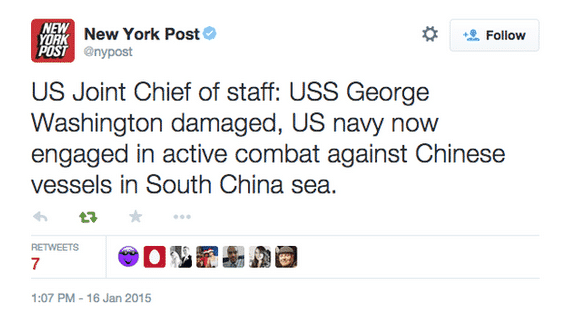