In October, after Google announced that it was working on magnetic nanoparticles that would seek out cancer cells in the bloodstream and report back to a smart wristband. Now, the news has come out that the search giant is also using synthetic skin to further develop the nanoparticles technology.

When the project was first announced, Google didn’t discuss how the nanoparticles would relay their findings. But, in a video from The Atlantic.

The facility is part of Google X – the research and development division that has so far given developed self-driving cars and Google Glass.

The luminous nanoparticles measure roughly one-thousandth the width of a red blood cell and the idea is they’ll collect information as they pass through the body. 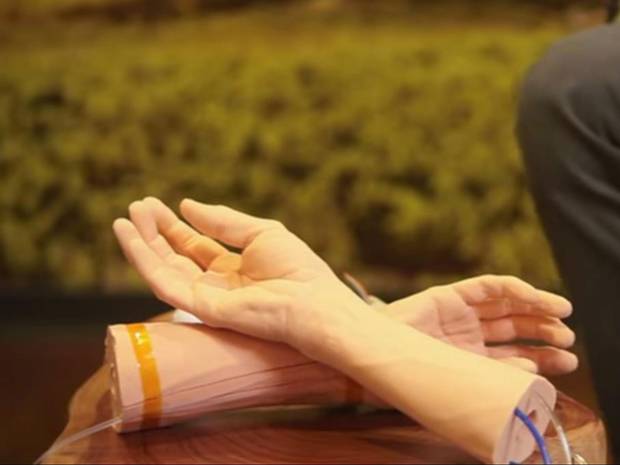 through the superficial veins on the underside of the wrist.

It was earlier reported that Google was working on magnetic nanoparticles that would find out cancer cells in the bloodstream and will be reported in a smart wristband. The company therefore needs to test its process with a range of scarily realistic fake arms that offer the same “auto-fluorescence and biochemical components” of real arms. Google is developing different types of arms to simulate different skin tones and types.

Andrew Conrad, the head of Google’s Life Sciences department said that “It’s way weirder to have cancer cells floating through your body that are constantly try to kill you.”

The video shown is well worth a watch and offers a tantalizing glimpse into the goings-on at Google X.