Hackers belonging to a group who go by the handle of The Exploit3rs hacked and defaced the official domains of Google, Microsoft and Kaspersky Labs all three designated for Morocco.

All the above domains were country code top level domains (ccTLD) are parked domains acquired by the tech biggies to protect the domain names from misused by cyber criminals. The Moroccan hackers dook over the over domain.ma, google.co.ma, google.ma, microsoft.ma and Kaspersky.ma domain names and left following message on all four hacked websites publicising their skills.

A full preview of the deface page is available below: 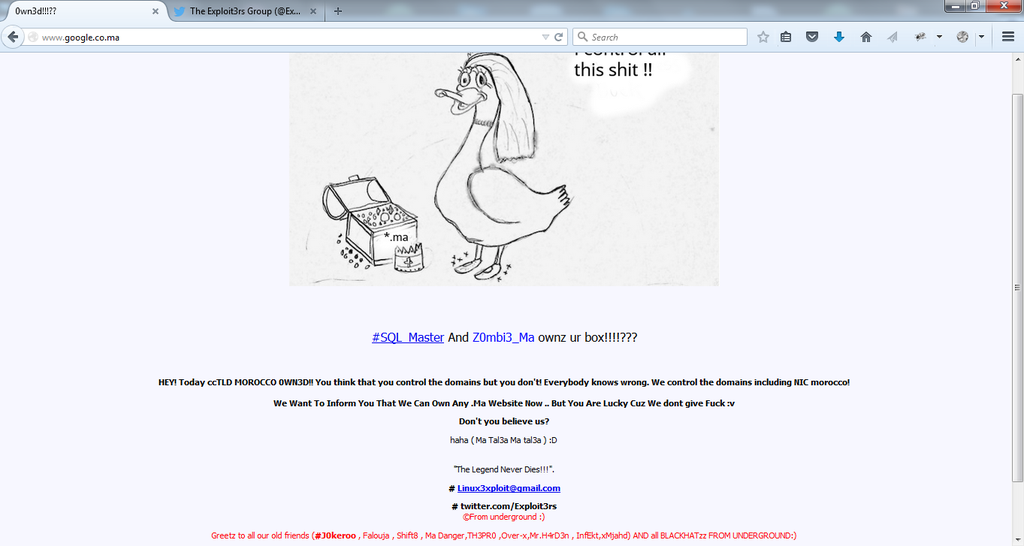 The Google.ma and Microsoft.ma both are parked domains while the Google.co.ma and Kaspersky.ma labs are the official domains for the companies in Morroco.

The Exploit3rs hackers seemed to have used a method called DNS hijacking to take over the above said pages. Google Vietnam and Google Malaysia had similarly been hacked earlier using almost identical methods by hackers. While Google Malaysia was hacked by  Bangladeshi hackers to show off their skills, the Google Vietnam was hacked by the infamous band of hackers called Lizard Squad who had ruined Christmas holidays of gamers by taking down PSN and Xbox servers all through December.

Links of targeted domains along with their zone-h mirrors as a proof of hack are available here.

#google Morocco has been #hacked ! https://t.co/rB9xOwlaah

Update : Microsoft and Google seemed to have restored control over the hacked pages though they are still showing the defaced message in many countries.