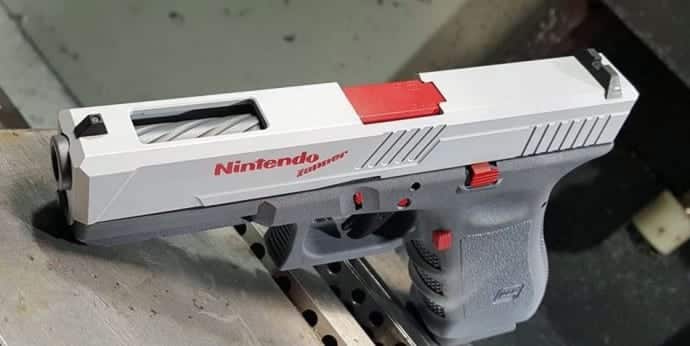 Based on the fake gun used in Nintendo’s Duck Hunt game, someone has gone ahead and created very cool looking real gun.

A Cerakote coating business in Texas, Black Sheep Arms, managed to transform a standard Glock into something that resembled Nintendo’s original, non-lethal version, known as the NES Zapper gun. It has been posted on the Facebook page of Precision Syndicate LLC, a of Texas-based machine prototyping company.

Released in 1984 in Japan and later in the U.S., the gaming accessory let NES gamers to point the fake gun at their television screen and shoot game targets. It may look like a light gun, but the Nintendo Glock fires very real bullets.

Finally… We were waiting for someone to let us do this. We weren’t the first to do it but WOW, this glock turned out good!

To make it work as an accessory for newer games, some game fans since then have modded the gun. However, it’s rather rare to see anyone use the playful Nintendo theme for real world weapons.

Responses to the post on Facebook have varied from people debating the sensibilities behind creating such a gun, to those enthusiastically attempting to find out how to buy one.

“The fact that this exists is why cops don’t have the time to make the decision of its a toy or a gun,” said one commenter, while another said, “Worthless craps for making this! Not only would a child have a hard enough time telling the diff if it’s real or fake imagine all the law enforcements that now might second guess it and lose their life and others around!”

However, there seem to be far more commenters probing about how to acquire the gun, which is a modified Glock.

Though, the concerns from some on the Facebook post may be well placed. Just a year and a half ago, a police officer in Ohio gravely shot at a 12-year-old Tamir Rice after the officer claimed that he confused the child’s toy gun for a real weapon.