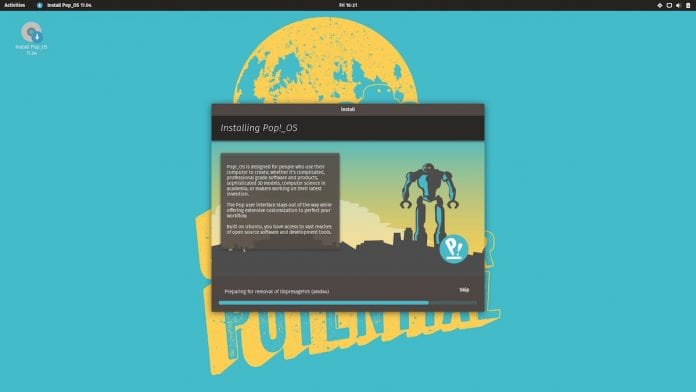 While Linux seems to be winning the Windows vs Linux battle, you would have noticed one astonishing thing. There are very few laptop and PC manufacturers in the world who ship Linux distro PCs/laptops.

If you take a count, there must be only 1 top Linux hardware maker against the top Windows 10 PC/laptop makers like Dell/HP/Acer, etc.

These manufacturers also ship DOS-based PCs which gives users the freedom to install any Linux distro they want but custom-fitted Linux distro PC/Laptop makers are rare.

One such Linux hardware manufacturer is System 76. System 76 has made a name for itself by offering desktops and laptops with the popular Ubuntu distro pre-installed, saving customers valuable time searching for that one resource – drivers.

Now System 76 has come out with its own Linux Distro called  POP!_OS. The Linux hardware manufacturer recently announced it was creating its own Linux distro, which will replace Ubuntu on its system.

If you are a Linux fan, you will notice that most Linux distros cater to a specific set of users like hackers or sysadmin/DevOps. Rarely do you see a Linux distro made for power users like hardcore programmers, scientists, roboticists, VR/AR scientists etc!

System 76 looks to fill this gap that exists in the Linux distro sphere. System 76’s Sriram Ramkrishna explained that the goal of POP!_OS is to give power users a clean palette to work with.

“In Pop!_OS there are no photo managers, music managers, games or graphics programs out-of-the-box,” he said. “The out-of-box experience is that of a clean canvas to start working from.”

The Pop!_OS will use Ubuntu as a base, and GNOME will be the desktop environment. System 76 is customizing the operating system, however, with things like fonts, themes, and icons, to create something truly unique and different from other distros.

Today, System 76 is rolling out the first official beta of the operating system for download.

“I distro surfed when Canonical announced the end of Unity. Ubuntu GNOME received the most attention from the team. We figured that it’s essentially the future of Ubuntu and we better get to know our new product. GNOME stood out. There was an abundance of technologies, thoughtful workflow, and with the extensions framework we saw the potential to shape the desktop to our customers’ needs. We liked GNOME. We adapted existing themes, icons, and fonts to the System76 brand. Then boot branding. Then distro settings and default apps. Then it wasn’t Ubuntu desktop anymore,” says Carl Richell, CEO, System76.

Richell adds, “Today, our first beta arrives. Download and install it. Tell us your thoughts and about any unexpected behavior. We’re here to answer questions, fix bugs, and refine this release so it shines come October 19th. Even with it being only our first swing, we intend to knock your socks off.”

Pop!_OS is a minimalist Linux operating system like Arch Linux, however, it differs in the audience it caters to – developers, programmers, scientists, astrophysicists etc. System 76’s Ramakrishna makes that clear. He says that he won’t want casual users to test the OS, but rather have hardcore professionals who need a serious distro for work to test their Pop!_OS.

Hardcore developers and programmers can download the beta version of Pop!_OS version here.

It comes in two different versions, one for X86_64 computers, and those with Nvidia graphics chipsets. You can then give your feedback to System 76 before it starts shipping computers and laptops running the OS starting from October 19.