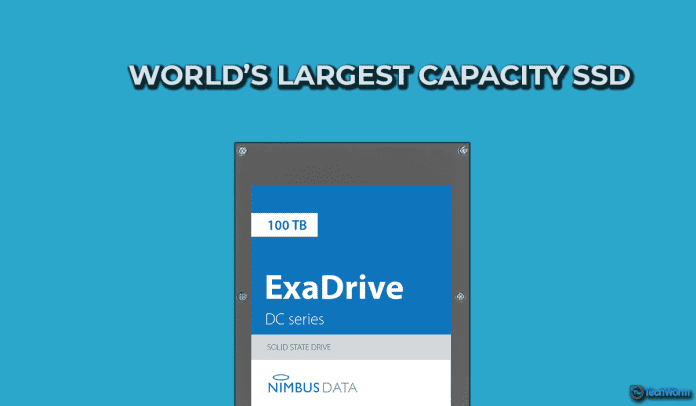 Basically, optimized for capacity and efficiency, Nimbus Data’s DC100 is a 3.5-inch form factor and has a SATA interface used by hard drives, which means it can work as a plug-and-play compatible with hundreds of storage and server platforms. The SSD uses Nimbus’s multi-processor architecture and 3D NAND, which provides enough capacity to store 20 million songs, 20,000 HD movies or 2,000 iPhones of data in a device that is “small enough to fit in your back pocket.”

The SSD model also offers up 500MB/s of sequential read and write throughput and up to 100,000 random read and write IOps (input/output operations per second). According to Nimbus Data, this performance also helps improve CPU performance by “50 percent or more.”

“The release of such a high capacity flash device that is fully compatible with HDD form factors opens up the opportunity to turbo charge big data platforms while at the same time improving reliability, significantly reducing device count, increasing data mobility, and lowering the TCO of multi-PB scale storage platforms,” said Eric Burgener, research vice president of Storage at IDC. “Devices of this class will allow flash to cost-effectively penetrate a broader set of use cases outside of tier 0 and tier 1 applications.”

The DC100 model consumes only 0.1 watts per TB (terabyte), which is 80-90% lower than other competing large-capacity SSDs. This makes it appropriate for edge and IoT applications. These improvements reduce total cost of ownership per TB by 42% compared to competing enterprise SSDs, helping accelerate flash memory adoption in both cloud infrastructure and edge computing.

Nimbus Data said its 100TB DC100 model will be priced at par with the SSD lineup for business and will start shipping in summer 2018. Nimbus will also offer a lesser 50TB capacity model. The DC100 is protected by a 5-year warranty covering an unlimited DWPD (Drive Writes Per Day) and will currently not be sold for consumer use.