If you are looking to learn Wi-Fi password hacking, this newly discovered flaw in WPA/WPA2 protocol will surely help you out.

Wifi password hacking has become popular as people are always in search of the free internet. But due to the advancement of technology, hacking wifi, and cracking passwords have become a difficult task to do.

The reason the newer wifi protocols have become safer is due to the implementation of WPA/WPA2 (wifi protected access) protocols. They made modern routers more secure and less prone to hacking.

How Was The New Wi-Fi Hack Discovered?

This new wifi hacking method was accidentally discovered by Jens Steube (lead developer in popular password-cracking tool Hashcat) while he was analyzing the newly-launched WPA3 protocol.

According to him, this wifi hacking will explicitly work against WPA/WPA2 wireless network protocols with Pairwise Master Key Identifier (PMKID)-based roaming features enabled.

Disclaimer: All content in this article is intended for security research purpose only. Techworm does not support the use of any tool to indulge in unethical practices. 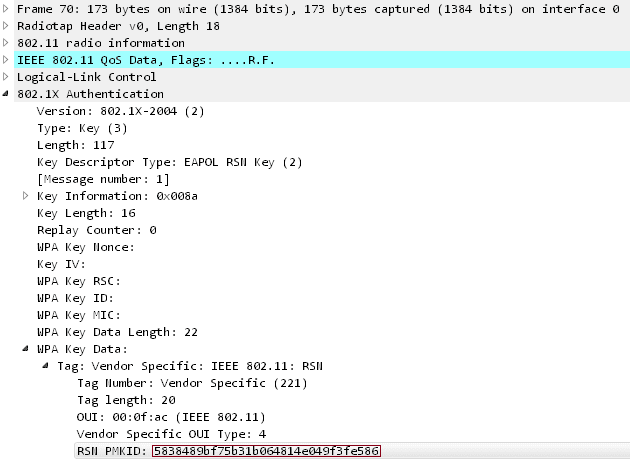 According to Steube (security researcher), previous wifi hacking methods requires someone to log into the network so that attackers can capture EAPOL (Extensible Authentication Protocol (EAP) over LAN ) which is a network authentication protocol used in IEEE 802.1X.

Whereas this new WIFI hack doesn’t require a user to be on a target network in order to capture credentials. Following are the steps to perform this wifi hack:-

Step-1: A hacker can use a tool such as hcxpcaptool to request the PMKID from the targeted access point and dump the received frame to a file.

Step-2: Using the hcxpcaptool , the output (in pcapng format) of the frame can be converted into a hash format accepted by Hashcat like this.

Step-3:  Now you can use this password cracking tool to obtain the WPA PSK (Pre-Shared Key) password and Boom you did it!

That’s the password of your targeted wireless network which may take time to crack depending on its size or length complexity.

Now we are not sure about which vendors this wifi hack technique will work. But Steube said it will work against all 802.11i/p/q/r networks with roaming functions enabled (most modern routers).

So users are highly advised to protect their WiFi networks with a secure password such as making the use of numbers, characters and some special characters as they are difficult to crack. which will save your wifi from being hacked

At last, we want to admit that this wifi hack won’t work against next-gen WPA3 simply because of the new harder to break protocol.

You May Also Like- Best Hacking Tools For Windows 10

So this was how to hack wifi password using the new WPA/WPA2 flaw.

We will also like to advise our readers not to download online tools that claim to be a wifi hacking tool, as they may contain malware.

Apple’s Director Of Machine Learning Resigns, Due To Return To Office Policy