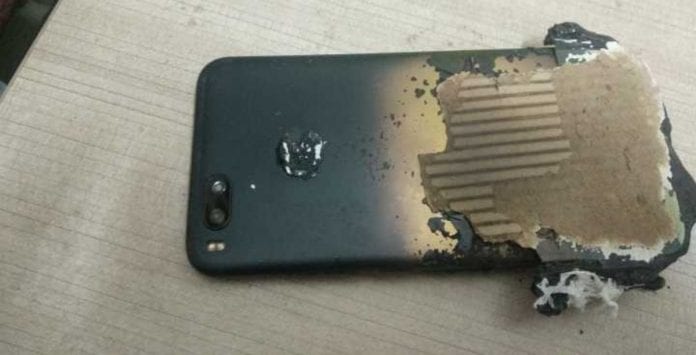 It is not uncommon to hear news of smartphone battery exploding while charging due to a defective battery, or bad charging adapter, or non-authorized charger, and others.

Xiaomi, the Chinese smartphone manufacturer, too has had its share of such incidents happening in the past. Now, another Xiaomi smartphone going up in flames has been added to its existing list.

This time it is the Xiaomi Mi A1, which is shocking, considering its big battery size.

According to a recent report, Xiaomi Mi A1 has reportedly exploded near a sleeping owner while it was charging.

The incident was shared on the MIUI forum by a member who claims his friend’s Xiaomi Mi A1 exploded while it was charging overnight. Although the smartphone exploded, the owner thankfully did not suffer any injuries as the device was placed in a protective case and it was at some distance from the owner.

Not much details about the condition of the smartphone or usage pattern of the device by the owner are known. The only thing known is that the owner has been using the smartphone for almost 8 months now and it was kept for charging while he slept.

This particular incident of Xiaomi Mi A1 smartphone exploding seems to an isolated case, as it been more than a year since the device has been launched. The incident has been reported to Xiaomi who are yet to issue an official statement on the matter.

As cautionary advice to all our readers, we request you to not use your smartphone while it is charging. Also, avoid leaving the device for charging overnight or keep them close while sleeping. Additionally, prevent using a non-authorized charger for your phone.