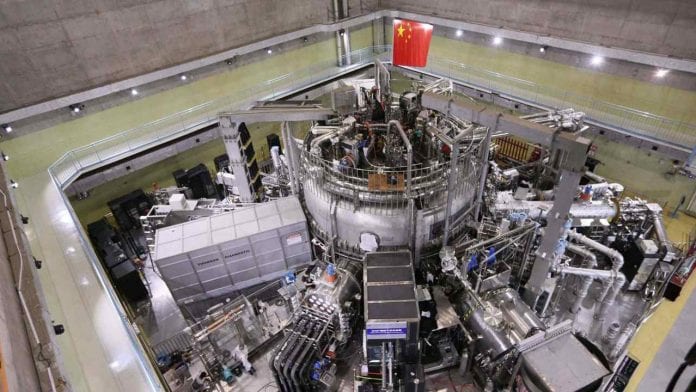 Last month, we had reported that a team of scientists at the Chengdu Aerospace Science and Technology Microelectronics System Research Institute Co (CASC) in China has developed an “artificial moon”, 8 times brighter than the natural moon to replace streetlights in the country by 2020.

Now, a team at the Hefei Institutes of Physical Science of the Chinese Academy of Sciences announced that its Experimental Advanced Superconducting Tokamak (EAST) reactor, has hit a new temperature of reaching 100 million degrees Celsius.

The EAST has been dubbed as “artificial sun” since it replicates the process used by the sun to produce energy. It burns at 100 million degrees Celsius, which is over six times hotter than the core of the sun. The temperature of the real sun’s core is at around 15 million degrees Celsius. The state-of-the-art reactor is designed to turn hydrogen into cost-effective green energy.

Hence, reaching over 100 million degrees Celsius is an important step as this is the minimum temperature required to create conditions that are suitable for nuclear fusion on Earth.

The aim of the EAST is to comprehend nuclear fusion process before building a full reactor and use it as an alternative source of energy on Earth in the future. The process promises more power and is far safer than fission, producing almost no dangerous nuclear waste.

“Nuclear fusion is arguably the best way for human beings to get energy. In terms of raw materials, deuterium and tritium required for nuclear fusion are almost inexhaustible in the ocean. Besides, nuclear fusion does not produce any radioactive waste, so it is extremely environmentally friendly,” said the researchers in a recently issued statement.

Matthew Hole, an Associate professor from the Australian National University told ABC News that the achievement was an important step for nuclear fusion science and could be the solution to global energy problems.

“The benefit is simple in that it is very large-scale baseload [continuous] energy production, with zero greenhouse gas emissions and no long-life radioactive waste.

The research group in charge of EAST say it accomplished this milestone through the use of various new methods in heating and controlling the plasma; however, they were able to maintain the record temperature for just around 10 seconds.

Dr. Hole also adds that the nuclear fusion reactors evade the risks related to the current nuclear fission reactors, which can be modified into dangerous weapons and are susceptible to possible meltdowns with catastrophic outcomes.

The artificial sun was designed and built by China back in 2006. EAST is 11 meters tall, has an 8 meters diameter and weighs 400 tons. According to China Daily, China becomes the first country to design and develop such an equipment on its own.