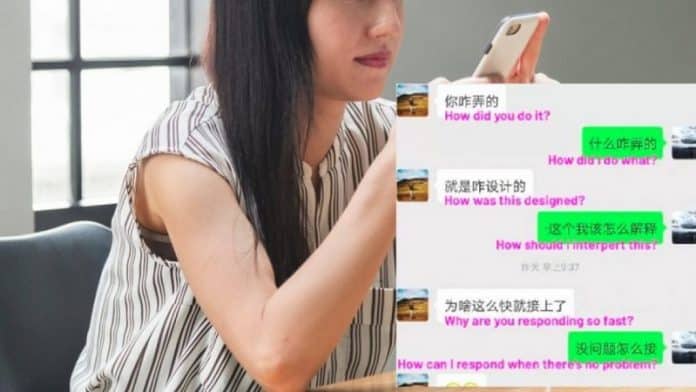 A busy boyfriend came up with a brilliant idea in an attempt to make his girlfriend happy when he realized that he was neglecting her texts on WeChat because of his demanding work schedule.

Li Kaixiang, a software engineer at e-commerce platform JD.com, used his programming skills to create a custom chatbot on WeChat that worked 24/7 to promptly reply to each of his girlfriend’s texts while he was busy working.

“Baby, this is the 618th day we’ve been together. Wish your mood is brighter than the sun,” was one of the several messages his chatbot sent to his girlfriend. This was followed by a rather unromantic message, which read “Temperature: 18.0° – 34.0° C… Wind: Level 3… Air quality: 42.0.”

Li who shared screenshots of the chatbot’s conversation with his girlfriend on Chinese microblogging site Weibo said he was surprised to find by the end of his day’s work, his girlfriend had exchanged 300 messages with the chatbot on the first day it went online.

However, in due course, it appears that his girlfriend grew suspicious over the speed at which she was receiving reply to her messages.

“How was this designed?” she asks during one part of their conversation. She further asks “Why are you responding so fast?” to which the chatbot manages to play dumb and says, “How can I respond when there’s no problem?”

Li’s Weibo account seems to have been deleted but screenshots of his post on Weibo have gone viral and people are asking him for the source code.

“It is such a good idea. I wouldn’t have to worry about irritating my girlfriend by not responding to her messages,” one Weibo user wrote.

“Brother, send me the source code please,” another man asked.

While others were impressed with Li’s romantic gesture, some admitted that chatting to a bot might actually not be a bad idea.

“Is it really a boyfriend that I lack? What I lack is a chatbot,” a Weibo user wrote.

However, some chose to caution about the consequences of chatting with a bot. “Be careful, your girlfriend might fall in love with the chatbot one day,” a user warned.