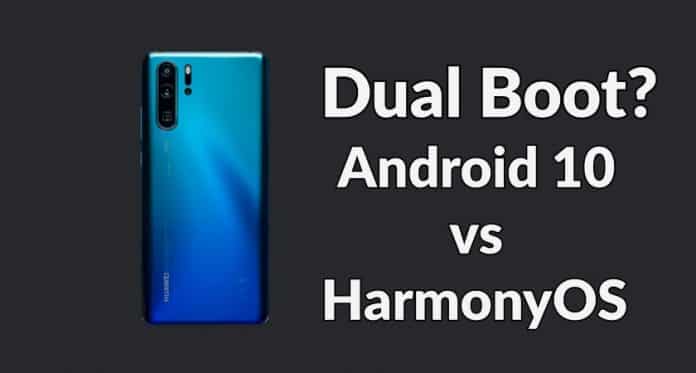 Chinese telecom giant, Huawei, already has its own in-house operating system called ‘HarmonyOS’ (known as HongMeng in China). While the company has launched a smart TV named ‘Honor Vision’ running the internal OS, Huawei has confirmed that it is not ready to use the internal OS in its smartphones yet.

To that effect, even Huawei’s founder and CEO, Ren Zhengfei had recently made a statement that “Huawei’s HarmonyOS Will Compete With Apple’s IOS In 2 Years”. In other words, it means that the company requires another 2 years to become a possible iOS competitor.

However, a recent video uploaded by the YouTube channel TechZG suggests that Huawei’s upcoming P40 series (P40 and P40 Pro) coming out in March 2020 could probably be the world’s first smartphones to run two operating systems, Google’s Android 10 (without Google apps) and HarmonyOS, side-by-side.

The revelation was also backed by a Twitter user @RODENT950 who claimed that the P40 series could dual boot both Android 10 and HarmonyOS.

The dual-boot strategy in Huawei’s P40 phones will allow users to choose from the OSs (Android 10 and HarmonyOS) at the time of booting. It will also give users the backup option to run Android (AOSP), in case they don’t like HarmonyOS. Besides this, Huawei will also get the chance to gather important customer feedback about its new operating system and make changes according to customer needs with passing time.

For those unaware, Huawei was swept into the trade war between Beijing and the U.S. on May 2019, where the latter had placed the company on its so-called Entity List. While Huawei had started working on its internal OS two years ago, the trade tiff prompted the company to accelerate the process of developing HarmonyOS – an open-source, microkernel-based distributed operating system. Rumored to be an alternative to Google’s operating system, Android, HarmonyOS is expected to power all kinds of devices such as TVs, smartwatches, speakers, IoT devices, vehicles and so on.

Huawei had recently released the Mate 30 and Mate 30 Pro with Android 10 but without support for Google’s apps and services because of the U.S. trade ban.

If trade restrictions on Huawei is not lifted by the U.S. by early 2020, the company may be forced to use HarmonyOS in its future smartphones. However, if the U.S. trade ban is lifted, there are chances that Huawei could ditch its current dual-boot strategy in favor of Android 10 (with Google services).

With the P40 series expected to launch in March 2020, it would be interesting to see what OS does Huawei opt for.