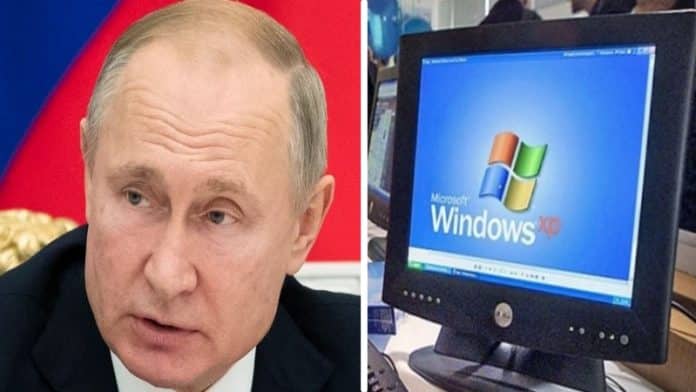 The photos showed Mr. Putin’s computer was running Windows XP, which was released in 2001. According to The Guardian, Mr. Putin uses the 18-year-old operating system at his Kremlin office and official Novo-Ogaryovo residence outside of Moscow.

However, this operating system has stopped receiving regular security updates from Microsoft since April 2014, making it vulnerable to hacking.

In fact, Microsoft warns on its website that computers running Windows XP are “vulnerable to security risks and viruses”.

Meanwhile, the use of Windows 10 is only approved for government offices that do not contain state secrets, which would not seem to apply to Mr. Putin’s computers.

Mr. Putin has long viewed the internet with suspicion. Russia has been obsessively trying to isolate itself from the internet world and boost its own tech industry.

The country is gradually discontinuing Microsoft and Google on government computers, as it is planning to switch to the Russian Astra Linux OS and domestic browsers such as Yandex.

Kremlin spokesman Dmitry Peskov has not commented on why Mr. Putin is still using an obsolete Microsoft operating system.

Last month, Russia banned the sale of devices that do not have pre-installed Russian software starting July 2020. Meanwhile, the “Sovereign Internet” law signed by Mr. Putin in May came into effect from November 1st.

This law gives the country’s government power to cut off the Russian segment of the internet from the rest of the world “in an emergency.”