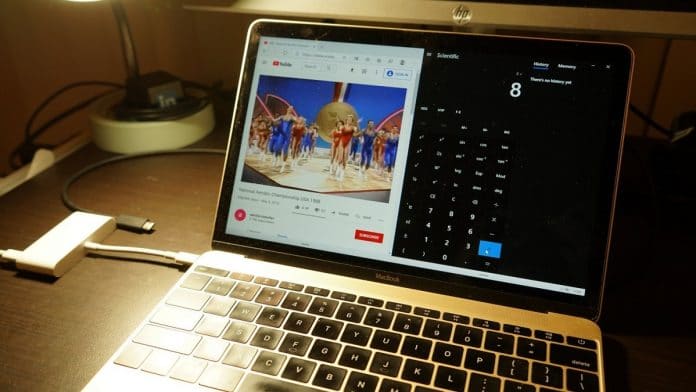 While Windows 10X – a special Windows 10 version – is made for dual-screen and foldable devices, Twitter user and developer @imbushuo thinks otherwise, as he has managed to get Windows 10X running on the unsupported machine such as Apple’s MacBook.

As seen in the video above, Windows 10X seems to be working smoothly on the MacBook without any noticeable glitch. One can see that the UI is the same as an emulator, which means that the MacBook is acting as a dual-screen device.

Further, the video also shows off apps running in dual-screen mode, the Windows 10X Start Menu in action and taskbar, along with parts of the new interface. The user can also be seen playing an instance of a YouTube clip, indicating that the audio works fine with the laptop’s trackpad.

Another Twitter user @NTAuthority shared another image showing off Windows 10X running in full-screen on the Lenovo ThinkPad T480s. However, some UI glitches were found in the initial use, but as per the user “the emulator image has some odd configuration packages installed.”

The above two instances show that it is possible to install Windows 10X on any Windows and macOS device.

However, the process of installation can be extremely both complex and not advisable. While it is recommended not to install Windows 10X onto any supported device, it is always amusing to see people find out ways to tweak and have fun with technology.