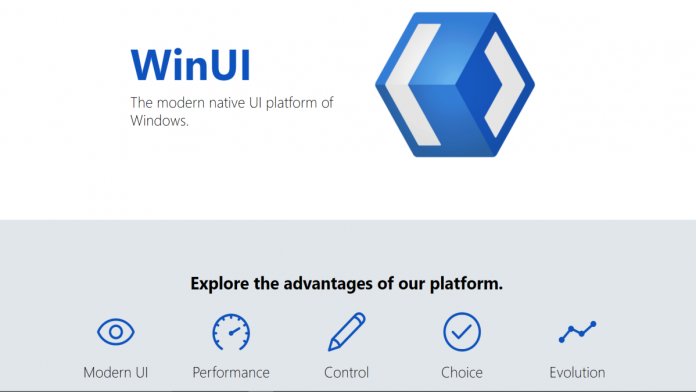 WinUI allows developers to access and use Fluent Design for Windows and native WinUI controls in Win32 apps. It can also be used in any Windows 10 UWP XAML app via NuGet packages, or in a Xamarin or Uno Platform. Recently, Microsoft had expanded the reach of WinUI by releasing WinUI 3.0 in alpha form.

According to the website, “WinUI makes it easy to build modern, seamless UIs that feel natural to use on every Windows device”. Microsoft’s idea is to have all applications in Windows to use the WinUI library in the future. It adds that WinUI “Embodies Fluent Design to enable intuitive, accessible, and powerful experiences and the latest user interface patterns.

The company states that developers can future-proof applications built for Windows 10 and Windows 10X by using WinUI. Also, the main advantage of WinUI is that it runs on a highly optimized C ++ core resulting in an “unmatched native performance”. As a result, applications using WinUI will have better performance and provide longer battery life for devices.

Adding further, the company notes that WinUI offers a state-of-the-art UI framework for all Windows apps across both Win32 and UWP. It provides a way to gradually migrate existing apps written in familiar technologies like MFC, Winforms, Silverlight, and WPF, allowing you to move these applications forward at your own pace. It also supports familiar languages spanning C++, C#, Visual Basic, and even Javascript via React Native for Windows.

For more information on the new WinUI library, you can read here and find the framework at Github here. For developers who wish to try out the WinUI 3.0 Alpha can register for the Insider Program here.