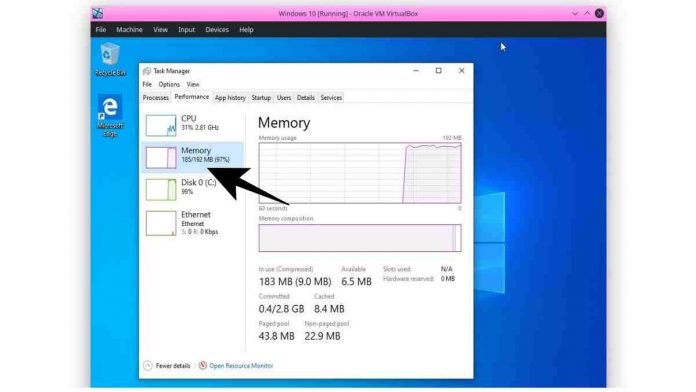 A Twitter user managed to run Windows 10 on a virtual machine with only 192 MB of RAM and partially booting with as little as 140MB, as spotted by Tom’s Hardware.

Sakura Nori (@0xN0ri), a 16-year-old embedded systems enthusiast and the developer behind the fun experiment, started with 512MB of RAM, which is half the minimum requirement to run Windows 10 (i.e. 1GB of RAM for Windows 10 32 bit).

Nori reduced the amount of RAM, first to 256MB, then to 192MB until it was no longer able to work properly. He attempted to run Windows 10 with only 128MB of RAM, but the operating system failed to load and crashed with a BSOD (blue screen of death) at boot.

128 is a bit too low pic.twitter.com/1WKlcHfKGL

However, when Nori tried to increase the RAM to 140MB, it allowed the operating system to boot, but didn’t make it to the login UI.

Windows 10 can boot on a bare minimum of 140MB RAM but LoginUI.exe won't start pic.twitter.com/KNymGWzUCb

According to Nori, he was able to make Windows 10 work without disabling services or “streamlining” the installation of Windows 10. However, he was able to open only the Task Manager, CMD and the File Explorer on the system with 192MB of RAM.

“It took around three minutes to boot up to the desktop and it’s unusable with the virtual machine file stored on my 7200 RPM hard drive,” the user explained to Tom’s Hardware. “I was only able to get task manager, CMD, and file explorer open on 192MB RAM and the performance was very bad with 15MB free.”

Other people soon followed suit, for instance, a Twitter user posted a screenshot of Windows 10 running on 170MB of RAM.

To know more about Nori and their various projects, check out their Github about page.