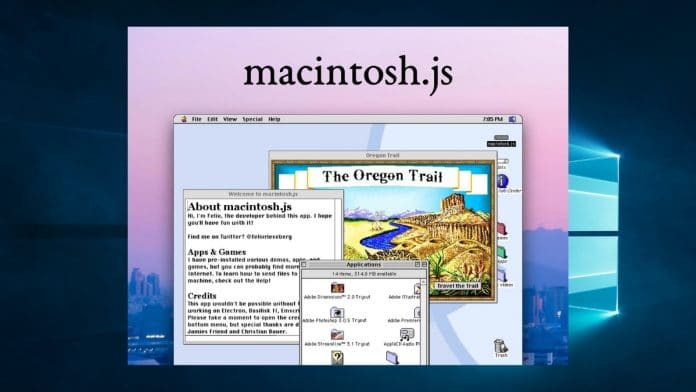 Announced in 1997, Mac OS 8 was coined as Apple’s next-generation operating system. Thanks to Slack developer Felix Rieseberg, you can now use MacOS 8 on a Windows, Linux, or modern macOS laptop or desktop as a downloadable application.

As you might remember, Felix Rieseberg also developed an emulator for running Windows 95 on modern-day operating systems.

This time around, Rieseberg has transformed an entire 1991 Macintosh Quadra with Mac OS 8.1 into a single Electron app that can be downloaded and installed with ease.

So here’s everything you need to know about the Mac OS 8 emulator.

The macintosh.js application developed by Felix Rieseberg relies on a virtual machine to emulate a Macintosh Quadra 900 with a Motorola CPU. This app is written in JavaScript and it comes with several demo apps and games.

I put an entire 1991 Macintosh Quadra with Mac OS 8.1 into an Electron app, together with a bunch of apps and games. It runs on Windows, macOS, and Linux… and JavaScript. Again: I'm sorry.

According to the developer, the preinstalled Internet Explorer, and Netscape on this emulator can’t be used to access the Internet as they are old versions of these programs. Luckily, you can transfer both applications and games using Macintosh Repository from your new PC to the emulator and run them.

Clearly, the emulator is dedicated to nerds and computer enthusiasts. To utilize this emulator to its full potential you can download old software from Macintosh Repository.

As of now, the project hasn’t been approved by Apple officially and it’s made public for educational purposes only.

If you are interested, you can visit the GitHub Page to download and install the Mac OS 8 app for Windows, Mac, or Linux. Do share your thoughts and opinions on this unique yet amusing emulator in the comments section below.