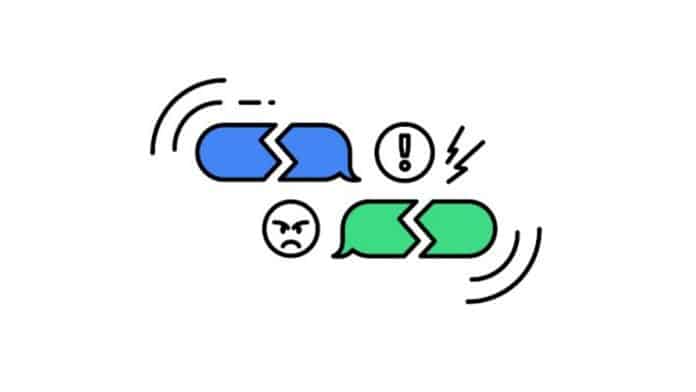 Earlier this year, Hiroshi Lockheimer, Senior Vice President of Platforms and Ecosystems at Google, had called out Apple for using “peer pressure and bullying” specifically teens through its iMessage app.

For those unaware, RCS is the new messaging protocol, which is offered by Google worldwide via its Android Messages app to all users who install and use it as a default texting app. This communication system is an alternative for SMS on Android devices that allows you to send richer, more engaging text messages than you could on SMS.

Now, the search giant has launched a new “Get The Message” campaign and website with the hashtag #GetTheMessage to pressurize Apple to accept RCS and improve texting between Android and iOS users.

“It’s time for Apple to fix texting. It’s not about the color of the bubbles. It’s the blurry videos, broken group chats, missing read receipts and typing indicators, no texting over Wi-Fi and more,” said the Google campaign.

“These problems exist because Apple refuses to adopt modern texting standards when people with iPhones and Android phones text each other.”

Raise your hand if you’ve ever had a green bubble vs. blue bubble debate in the group chat.

Texting with friends shouldn’t be complicated. That’s why it's time for Apple to #GetTheMessage. Learn more ? https://t.co/guGdlHT2k8

Google is asking Apple to fix these issues by supporting RCS, which offers several features of iMessage and can be used across both iOS and Android.

“Messaging should bring people together not pull them apart,” Google said in a statement. “The Android team’s goal is to make texting a more secure, modern and enjoyable experience for everyone, regardless of the phone they’re using. Because it shouldn’t matter what phone they have — things should just work.”

According to the tech giant, Apple turns texts between iPhones and Android phones into SMS and MMS, which are out-of-date technologies from the 90s and 00s.

“But Apple can adopt RCS the modern industry standard for these threads instead. Solving the problem without changing your iPhone to iPhone conversations and making messaging better for everyone,” said Google.

Google says the campaign aims to addresses not only the ‘blue bubble, green bubble’ debate, but also other common challenges in cross-platform messaging, including end-to-end encryption, sharing of high-quality images and videos, lack of typing indicators, and less control over group conversations. These issues continue to exist due to the iPhone’s continued use of SMS and MMS for non-iMessage conversations.

While Apple has yet to react to the new Google RCS campaign, it seems unlikely that the campaign will push the Cupertino giant into adopting RCS. We need to wait and watch if Apple has a change of heart. Stay tuned for more updates!