While the pro-democracy protesters in Hong Kong are protesting on land, hacktivists from different part of the globe have joined together and taken a oath to support the protestors in their fight for democracy.

Anonymous earlier today hacked and defaced many Hong Kong based websites including few of the Chinese Government websites.

In the great tradition of civil disobedience, We, Anonymous, declared war on injustice a few years ago. Once again the Chinese government strikes hard at its own people. At this very moment Chinese police forces are hurting innocent citizens who cry for liberty. Since we are many and we do not fear ANY abusive government or institution in the globe, we also declared war against the Chinese Government, well known for its authoritarian posture. We are only targeting .gov.cn and .gov.hk .mil.cn in opposition to their oppressive ways. We emphatically condemn those attacks against non governmental or non military targets. We stand in solidarity with the citizens of Hong Kong, a Statement released by the Anonymous read.

The below mentioned Government websites of China was hacked and defaced by the hackers collective today.

Database of www.gyx.gov.cn was also leaked on pastebin 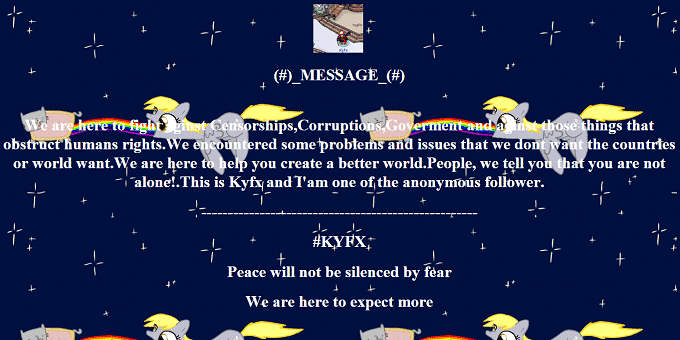 Message on one of the deface page read,

We are here to fight against Censorships,Corruptions, Government and against those things that obstruct humans rights.We encountered some problems and issues that we dont want the countries or world want.We are here to help you create a better world.People, we tell you that you are not alone!.This is Kyfx and I’am one of the anonymous follower.

Anonymous not the only one’s targeting Chinese Government websites!!!

For the Cyber-war which has been called upon by Anonymous, this is  just the beginning.  Hackers from different Groups have already joined hands and started taking part in the operation dubbed under #OpHK, #OperationHongKong, #OpHongKong.

Report suggests more than hundreds of Hong Kong based website have already been hacked and defaced within the last few days under the Operation HongKong, while several hundred other were brought down via DDoS attacks by other hacker groups in support of the pro-democracy protests going on in Hong Kong. Major sites which were hacked and DDoSed include https://moj.gov.cn/ https://police.gov.hk/ and https://www.mps.gov.cn/, two of these websites are yet to recover from the DDoS campaign against them.

“The war has just began”, we are watching you, one of the Anonymous activist told Techworm, addressing the protestors, the spokesperson said,  “Protesters of Hong Kong you are not alone, we are always with you.”

At the time of writing this article all websites were still showing the defaced page.