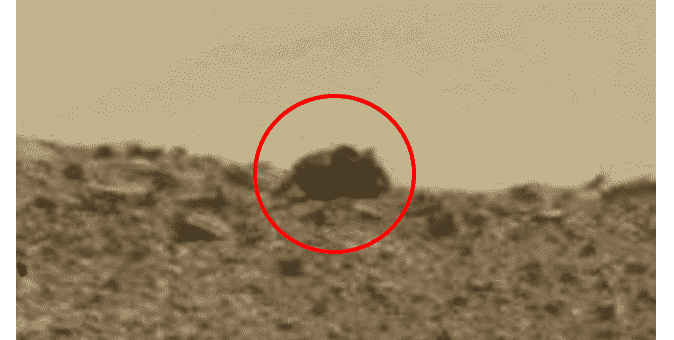 The latest images released by NASA’s Curiosity Rover have spotted a Martian mouse on the Red Planet that were captured during the lander’s exploration of the Gale Crater.

According to the space agency, Curiosity recorded the black-and-white photos using its Navigational Cameras (NavCams), which are designed to take a wide-angle view of the Martian terrain.

However, these engineering cameras are not capable of shooting images in color as the spacecraft’s 34 millimeter and 100 millimeter Mast Cameras can.

According to a video on YouTube channel ArtAlienTV, a picture that appears to show a giant mouse scurrying across the surface of Mars was taken by the rover’s right-hand mast-cam at 04:46 on November 1, last year, close to the ridge of the 154-kilometer-wide (96 miles) Gale Crater.

While no official announcement about the discovery of alien mice on Mars has yet been made by NASA, Joe White, who owns ArtAlienTV, says that the creature is “plain as day” and could be about “two or three feet [60 to 90 centimeters] long.”

“A possible very large mouse or other rodent on Mars in Gale Crater sitting on a ridge plain as day,” White said.

The alien hunter, however, went on to say that what he saw could likely be an optical illusion but it did seem to have a nose, big ears and eyes.

The Curiosity Rover has spent more than three years studying mars and whether it can support life. This is not the first time that seemingly unexplainable objects have been spotted by Curiosity Rover. So far this year, they have spotted a lonely bear, a Star Destroyer, a ghostly woman and many more “mysterious” things.