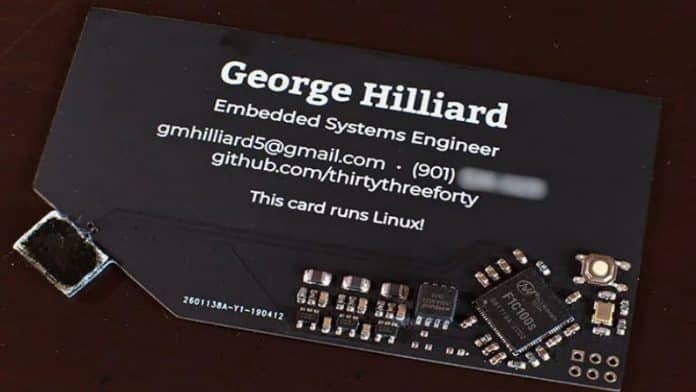 An embedded system engineer in the United States has created his own business card that can run Linux.

For those unaware, a business card typically bearing business information such as name, e-mail address, phone number, and website about a company or individual. They are shared during formal introductions as a convenience for retrieving contact information.

Check Out- The Actual Business Cards Of Famous People

George Hilliard, the creator of the Linux-run business card, said that the idea for the business card came to him when he thought, “These processors are nearly cheap enough to give away.”

So, how to get the card running? The bottom left corner of the business card has a USB port that can be plugged into a computer. Once the card has been inserted, it boots in about 6 seconds and shows up over USB as a flash drive and a virtual serial port that can be used to log into the card’s shell.

The flash drive has a README file that has a copy of George’s resume, and some of his photography. The shell has several games and Unix classics such as fortune and rogue, a small 2048, and a small MicroPython interpreter. All of these features are packed on a very small 8MB flash chip.

George noted that the “bootloader fits in 256KB, the kernel is 1.6MB, and the whole root filesystem is 2.4MB.” This leaves a lot of space for the virtual flash drive. It also contains a writable home directory just in case anyone wants to save some data on the card. This can also be saved on the flash chip, which is properly wear levelled with UBI.

The processor is an Allwinner F1C100 and it includes both RAM and CPU in a single package. Each card costs about $3 to make, which according to George, is pretty cheap and a good price for a fully functional Linux computer. However, this pricing does not include shipping.

While George’s Linux-powered business card may sound cool, the project was not a smooth sailing one though. He has detailed the challenges faced by him while making the business card in his blog post.

For more information about how to make the business card, you can go to George’s blog and the GitHub page.