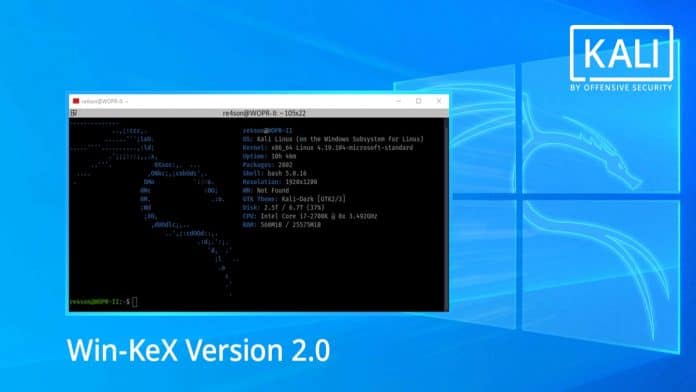 For those unaware, Win-KeX is a graphical desktop environment for Kali Linux running in Windows Subsystem for Linux (WSL 2). It looks to run a persistent-session graphical user interface (GUI) on a Windows 10 computer and improve functionality and user experience.

Besides the Win-KeX Window mode, the new Win-KeX Version 2.0 now also supports Win-KeX SL mode. This mode provides seamless integration of Kali Linux into the Windows desktop with the Windows Start menu at the bottom and the Kali panel at the top of the screen.

Applications started via the panel will share the desktop with Microsoft Windows applications. To start Win-KeX in Seamless mode with sound support, run:

It is important to note if you are starting Win-KeX SL or Win-KeX SL with sounds support for the first time, please ensure that to select “Public networks“ when asked for authorisation so as to allow traffic through the Windows Defender firewall.

In addition, Win-KeX now supports concurrent sessions that allows you to run the Win-KeX GUI sessions as an unprivileged user, root user, and in Seamless session mode.

You can now launch “kex” from anywhere, which means you no more cd-ing into the Kali filesystem required. Also, the Win-KeX version has enabled the shared clipboard feature that allows to cut and paste content between Kali and Windows apps.

In order to run Win-KeX version 2.0, you need to run Windows 10 version 2004 or higher supporting WSL2. For more information, you can check out Kali’s documentation site.